Profiles of Editors and Publishers in Andorra

Throughout the 19th century the publishing industry in Andorra was almost nonexistent. Typically, Relació sobre la Vall d’Andorra (1838), by Brother Tomàs Junoy, the provicar of Anyós (where he had taken refuge durante the first Carlist War), is mentioned as one of the first Andorran books, even though it came off the Imprenta Montaubin in Toulouse. A similar comment can be made about the Historia i novena de Nostra Senyora de Meritxell, an anonymous work that was attributed to Luis Ignasi Fiter i Cava, and was printed in Barcelona in 1874 on the Tipografía Católica, or about the first editions of legal texts filed by the Consell General d’Andorra, La Nova Reforma (1866) and La Cuestión de Andorra (1894).

One must wait well into the 20th century for the first books to be published in Andorra, among these being Conoce tu Citroën (1952), a self-publication by B. Riberaygua which is the only title published by the ephemeral Editorial Meier. In fact, during the period 1945-1959, books published in Andorra were for the most part meant to be exported or were dedicated to tourism (mountain guides, tourist monographs, books about skiing, maps, etc.), a task in which, for example, publications by the photography pioneer Valentí Claverol stood out.

The first true publishing house, which also will become one of the most important ones, was Casal i Vall, founded in 1956 by brothers Jaume, Joan and Narcís Casal i Vall (even though in 1952 their father had published as a separate volume El trovador de la Virgen, by Félix M. Monasterior, with the seal of Exportación Casals). Casal i Vall is dedicated initially to the publication of works with a religious theme (essays, manuals for youngsters), with Spanish readers especially in mind and, to a lesser degree, French readers. It created, for example, an Encyclopédie Liliput, along the lines of the collections Grano de Arena (José Janés) or La Pulga (Germán Plaza), since the Andorran population is not large enough to sustain a local industry. Very soon, at the insistence of several Catalan publishers, Casal i Vall equipped itself with its own graphics studios, a printing press and paperback-binding workshops, with very modern machinery that was inaccessible to Spanish printers in those postwar years which, when added to the nonexistence of paper, allowed it to become a provider of services for various Spanish publishers (Caralt, Miracle, Vergara, Nauta, Alfaguara, etc.). Given the agreements which facilitated the exportation of native Andorran products to Spain, books were promoted as being made of recycled Andorran pulp (an industry missing in the Pyrenees country), but they had to obtain a legal deposit in Barcelona. Among their most important collaborations are the agreement established with Publicacions de la Abadia de Montserrat to publish the Nou Testament (1961) and the accord known as the Biblia de Montserrat (1970), as well as the agreement with the owner of Sudamericana y Edhasa, Antoni López Llausàs, to produce some of the editions of Pompeu Fabra's Diccionari General de la Llengua Catalana.

Through the early 1970s, Andorran publishing experiences a sort of boom which coincides with the creation of institutions like the Cercle de les Arts i de les Lletres (1967) and, beginning in 1960, with the first editions clearly produced with the local readership in mind. Nevertheless, the most important initiatives continue to be tightly linked to the political situation in Spain. After a trip through the refugee camps of Saint Cyprien and Argelès, Norbert Orobitg exiled himself in Andorra, where he founded Publicitat Andográfica, Edicions Mirador del Pirineu (books of political testimony, which often were seized when attempts were made to distribute them in Spain) and the strictly cultural journal Claror (which had only eleven issues since they could not obtain authorization from Spanish censors, despite the intercession of Andorran ecclesiastical authorities).

The Societat Limitada Editorial Andorra, created by the Barcelona publisher Jaume Aymà y the Andorran Bartomeu Rebés, became one of the main publishing houses in Spain which reintroduced literature written by Republican exiles, through such collections as Andorra (Max Aub y Ramón J. Sender) or Valira (Serrano Poncela, Otaola, Manuel Andújar, Rosa Chacel, Francisco Ayala), as well as works written by notable Latin American authors (Manuel Grimalt and Miguel Ángel Asturias), some initiatives by Manuel Vázquez Montalbán, and some titles in Catalan in the collection Ahir-Demà (Guillem Díaz-Plaja, Lluís Capdevila, Enric Morera, etc.). When in 1972 Aymà abandoned the Societat, it stopped publishing for a several years, and when it resumed, it did so with other plans which were influenced by Spanish political evolution.

With the beginning of Spain's democratization, and the resulting drop in exports to its neighbor, the Andorran publishing industry experienced a change in orientation which concided with a progressive andorrization of the educational system, but production was very notably reduced between approximately 1972 and 1987. This period coincides precisely with the inactivity of Bartomeu Rebés, who in 1978 attempts to revitalize Editorial Andorra with books targeting local readership.

In terms of quantity, in 1976 only four titles were published in Andorra, but a decade later some 70 works were appearing annually, and the interval between 1987 and 1993 has been identified as the golden age of Andorran publishing. This phenomenon can be explained by the vitality of the publication of official institutions (the Consell General initiates in 1978 the publication of the works of the Institut d'Estudis Andorrans, for example) and of the various cultural associations, as well as by the appearance of small publishers like Airosa (which focused on poetry: Agustí Bartra, Martí i Pol and Vicenç Andrés Estellés), Editorial Maià (works with an Andorran theme or author), and Promocions Literàries (directed by Ricard Fiter), among others, as well as by Casal i Vall's continuation and the relaunching of the Editorial Andorra (by Rebés's sons), which, in addition to managing the publisher's catalogue, establishes collaborative agreements to publish new works.

Following this era, the sector stabilizes, with the continuation of the three main publishing houses, editions and occasional self-publications, plus the weight of the activity linked to social, cultural, and sporting organizations. Even so, it is worth the trouble at least to note the appearance of Editorial Límits, which in addition to translating into Catalan authors as diverse as William Styron, Jean-Claude Izzo or Michel del Castillo, created a collection (Poesia Errat) in collaboration with Editorial Andorra which was to be dedicated to translating universal poetry to Catalan, among whose publications Per què has deixat el cavall sol, de Mahmud Darwich, stands out, as does the translation of Margarita Cristell Criballés, which is preceded by a prologue written by the Arabic scholar Pedro Martínez Montávez and displays a cover by Perejaume.

Also from the 1990s comes the creation of organizations which are very much involved in Andorran publishing, such as the Associació d'Escriptors del Principat d'Andorra (1995), the Biblioteca Pública del Govern (1996) and the Museu del Llibre in La Massana (1999), which was set into motion by Antoni Morell and supported initially by the poet Miquel Martí i Pol. 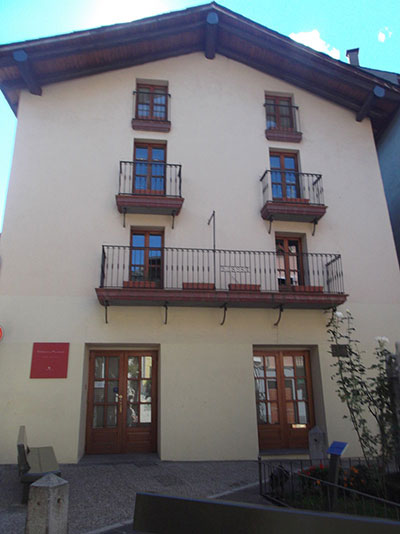