The circulation of books in Chile dates back to Colonial times; however it is only with the advent of the Republic that materials printed in national workshops begin to be published and sold. During the process of obtaining independence, the governing Junta presided over by José Miguel Carrera makes arrangements for purchasing a printing press, which is carried out at the end of 1811. Along with the printing press, three typographers arrive at the port of Valparaíso, individuals who would take charge of making the machine operational. In their workshops are published the first books and the first newspaper, La Aurora de Chile (1812-1813), whose director was Brother Camilo Henríquez.

The printed materials trade grows gradually during the first half of the 19th century, especially in Valparaiso, where the Spanish bookshop owner and printer José Santos Tornero arrives in 1834. This important figure opens the Librería Española in the port city in 1837, and later in Santiago he establishes another with the same name. Nonetheless, books continue to be scarce luxury goods, as José Victorino Lastarria expressed it in 1878 in Recuerdos literarios: The book supply available at that time was very scarce and exorbitant in price. Many mystic books and books of ancient Spanish literature formed this collection, the most common ones being civil law books, which cost more than a peso in silver, very few in history, none in the sciences, and some juridical and political treatises… (40). Other young people such as Lastarria attempt to strengthen the country’s intellectual life by publishing literary newspapers and organizing the first academies. The printed material that characterizes this group of lettered individuals, know as the Movimiento de 1942, is El Crepúsculo, a monthly paper dedicated to the diffusion of enlightened and liberal knowledge. It is here that the polemical essay Sociabilidad chilena (1844), by Francisco Bilbao, also appears.

Having stated this, the most outstanding publishing house in the 19th century with regard to the publication of books is the Imprenta del Mercurio (1827-1880), which stood out not only because it gave life to the first business-oriented newspaper, Mercurio de Valparaíso, but because it published foreign and national novels. It is at beginning in the second half of the century when the publication of national authors in book form increases and diversifies, highlighting the Romantic-Realist novels of Alberto Blest Gana, who in fact publishes La aritmética en el amor (1860) with the Imprenta del Mercurio.

Toward the end of the century, in the period of modernization, the book market and its industria prosper. The Imprenta Barcelona (1891-1918) becomes a reference point for graphic and technological renovation. In the area of the publication of fiction, from 1910 until 1913 Barcelona edits and prints, under one layout, the collection of the Biblioteca de Escritores de Chile, a series which counts on an anthology of works by various national writers. But it is the Nascimento publishing house which contributes in a decisive way to the development of national literature. Its owner, Carlos George-Nascimento, gradually expands its book catalogue, with the 1923 printing in Chile of the first editions of Gabriela Mistral’s Desolación and Pablo Neruda’s Crepusculario marking the beginning of his prominent career.

The figure of the modern publisher already is delineated in bold strokes in the first decades of the 20th century. Another enterprise which is implicated in this process and in the growth of the book market is the Editorial Zig-Zag, which privileges the creation of literary journals, an irreplaceable bulwark that accompanies the formation of the national literary institutionality and the new century’s Vanguard scene, to later on orient its publishing line to the publication of books. From 1940 on, its catalogue grows and it begins to distribute its books nationally and internationally. In 1971, the Unidad Popular government, in the context of its educational democratization project, buys the Zig-Zag publishing house, which now calls itself the Editora Nacional Quimantú, under the direction of Joaquín Gutiérrez. This publisher places in circulation books which are accessible for the general populace, since its program at its base views books as an irreplaceable support for the emancipation of the public’s awareness.

The massification of reading and the importance which is granted to its practice during these years disappears during the military dictatorship. Only at the end of the 80s is the country’s publishing and literary sector once again active, with the pioneering work of Editorial Cuarto Propio, which was founded in 1984. As of 1990, the agency of independent publishers which today count on a market which is more and more significant stands out, which appears in the varied and numerous book fairs at which they get together. 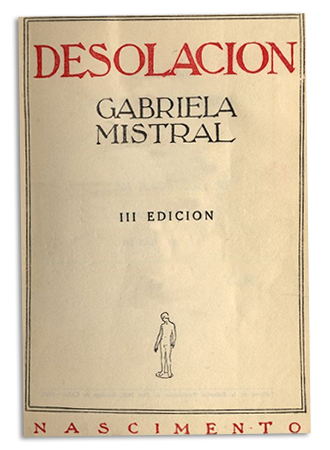 Book cover «Desolación», by Gabriela Mistral, of the Editorial Nascimento.