The thin Spanish population with high level education, or the lack of cultural promotion and dissemination seem to have negatively influenced the emergence of publishers and publishing houses through the history of Equatorial Guinea. The first school in the Spanish Guinea (present Equatorial Guinea) was created under the influence of the Jesuit missionaries in the second half of the 19th century (in 1863). This could be the date of the beginning of the cultural colonization of the autochthonous younger generations, then called indigenous. The resistance of the parents against the internment of their children in the centers run by the Catholic mission delayed both the cultural and evangelizing work of the natives. From 1863 to 1953, all what was published as books in those territories of Fernando Poo, Annobon, Corisco, Elobey Grande, Elobey Chico and Río Muni was made in the Peninsula (Spain); that is, the travel chronicles of both the missionaries and the Spanish scholars, in addition to the reports of the governors appointed to the Spanish territories.

Fallen in misfortune of the Jesuit missionaries (1872), they were replaced by the Claretian missionaries (officially since 1883). In 1899, Governor José Rodríguez de Vera led the first printing machine to former Santa Isabel (now Malabo). In 1901 a fortnightly newspaper entitled El Eco de Fernando Po was published. It was founded by Governor José de Ibarra and Enrique López Perea. Only seven numbers of this newspaper was published. That same year (1901), Father Armengol Coll imports a cylindrical printing machine –named Little Blas- bought in Barcelona at the Cunill Typographic Workshop. This machine, once in Fernando Poo (today Bioko), was installed in the mission of Banapá (very close to the current Malabo), under the care of the School of Arts and Crafts run by the Claretian missionaries.

Since 1st April 1903 the fortnightly magazine La Guinea Española appeared. In 1904 the press called Montserrat of cylindrical pressure was acquired; this buying will allow the publication of the Boletín Oficial de los Territorios Españoles del Golfo de Guinea (The Official Gazette of the Spanish Territories of the Gulf of Guinea). The publication of the magazine La Guinea Española was interrupted from August 1940 to March 1943, because papers did not arrive from the Peninsula due to the restrictions caused after the Spanish Civil War (1936-1939). The publication was renewed in April 1943, and continued to August 1968, when it was renamed La Guinea Ecuatorial since the independence of the country on October 12, 1968. It stopped being published in 1969.

However, despite these infrastructures, and regarding the literary book's production, there were no editors, neither publishers in Equatorial Guinea, in view of the fact that the books were edited and published in Spain. The editors that we found in this long colonial period (1901-1969) were Spaniards, such as Viuda e Hijos de Sanz y Calleja (Madrid) in whose headquarters was published in 1919 the book of José Más Laglera entitled En el país de los bubis. Escenas de vida en Fernando Poo (In the Bubis'country. Scenes of life in Fernando Poo), republished in 1931 with a prologue by the known writer Miguel de Unamuno; another editor was the Institute of African Studies (IDEA) under the Higher Council for Scientific Research (CSIC), which published, among other titles, the novel by Leoncio Evita Enoy entitled Cuando los combes luchaban (When the Combes fought [1953]). Other books of this period do not carry an editorial stamp. The printing press simply indicated where the books were printed, such as Mobbe, un negro de Fernando Poo (Mobbe, a black man of Fernando Poo), by Joaquín Rodríguez Barrera (Barcelona: Vaila, Alen y Domingo, 1931); Una lanza por el boabí (A lance by the boabí), by Daniel Jones Mathama (Barcelona: Typographic Printing Cat. Casals, S. L., 1962), etc.

After the independence of Equatorial Guinea, neither editors nor publishers of any type of book arose, partly due to the anti-Spanishness of the political regime that was established between 1969 and 1979, or also due to the Spanish Decree that considered Equatorial Guinea as «confidential matter», imposing the Media's silence in everything related to Equatorial Guinea. We will have to wait until the eighties and nineties of the 20th century to be able to talk about book editors in Equatorial Guinea; that is, Guinea-Equatorian authors with a literary theme.

It was the Spanish Agency for International Cooperation (AECI) that led the promotion of literary publications with the creation of the magazine Africa 2000 and the opening of the Hispano-Guinean Cultural Center. The magazine and the mentioned Cultural Center served to promote and support the publication of literary creations (poetry, stories, essays, etc.) of Guinea-Equatorian authors, as well as to encourage them, thanks to the establishment of prizes on the occasion of October 12, the Hispanic Day. The AECI and its CCH-G became the publisher of both literary and essay books; these were printed either in Spain (with ISBN), or in Equatorial Guinea (in offset and without ISBN). Among the first ones were Sueños en mi selva (poetic anthology) [Dreams in my jungle (poetic anthology)] by Juan Balboa Boneke (1987, with an ISBN) or El reencuentro: el retorno del exiliado [The reunion: the return of the exiled, (the same author)] (1985, printed in Spain and without ISBN), etc. Among the second we highlighted were El párroco de Niefang [The Priest of Niefang (1996)] and Huellas bajo tierra [Footprints in the underground] (1998), both books written by Joaquín Mbomío Bacheng; Voces de Espuma [Foam voices] (1987), by Ciriaco Bokesa Napo; Álbum poético [Poetic album] (1996), by Jerónimo Rope Bomabá; Delirios [Delirium] (1991), by María Nsué Angüe; Adjá-Adjá y otros relatos [Adjá-Adjá and other stories] (1994), by Maximiliano Nkogo Esono, etc.

We have, then, two types of editors and publishers in Equatorial Guinea. Firstly, we can mention those who operate directly abroad, the ones who are in charge of the bulk of the Guineo-Equatorian literary book, and second, those who are trying to publish in the country, but who end up sending their texts to be printed abroad. Among the first ones were the Spanish official publishers, such as the Institute for African Studies (IDEA) of the Higher Council for Scientific Research (CSIC), where the novel Cuando los combes luchaban [When the Combes were fighting] (1953) by Leoncio Evita Enoy appeared; the mentioned AECI / CCH-G or the National University of Distance Education, UNED (the novel Ekomo -1985-, by María Nsué Angüé), as well as private publishers, both Spanish and foreigners, such as Sial Ediciones (Madrid), Editorial Mey (Barcelona), Ediciones en Auge (Vienna), Plaza & Janés (Madrid), Pángola Ediciones (Barcelona), Carena Ediciones (Barcelona), El Cobre (Barcelona), Ceiba Ediciones (Barcelona), Editorial Malamba (Ávila), etc. Actually we also have Mares de Guinea, a literary publisher of titles such as El secreto de los libros [Books' secret] (2013), with its books printed outside of Equatorial Guinea.

In the same way, we can also highlight works that suffered the hard process of self-publishing. Many people enforce this difficult way of publication when their works, after several years waiting, do not come to light. Today you can attend book presentations whose authors, after hard years saving money, have ended up becoming editors of their own works. The publishing company Círculo Rojo supports this way of publication that represents a great economic sacrifice for many writers. 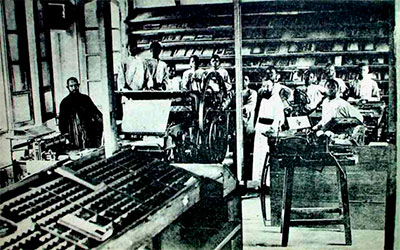 Printing of the mission in Spanish Guinea.