Profiles of Editors and Publishers in Morocco

Morocco has a noteworthy tradition of publishing in Spanish; it is peripheral with respect to the Ibero-American publishing landscape, and related somewhat to what exists in non-Spanish speaking countries. Multiple imperatives made it impossible, not just unfeasible, to develop professional publishing houses. The production of books as such has been taking place from mid-19th century up to the present by means of printing presses, with a certain confusion between publishing and printing tasks having been established at the beginning. The history of publishing in Morocco is inseparable from the evolutionary voyage which was followed by the printers which realized significant (yet deficient) publishing production in the pre-colonial, colonial and post-colonial era.

Spain's successive military campaigns in Morocco, which began with the War of Africa (1859-1860) and ended with the post-battle of Annual Pacification of Rif (1927), introduce the printing press especially to Tetuan, where newspapers are published in the area for the first time: El Eco de Tetuán, with only one issue in 1860, and El Noticiero de Tetuán, from August 1860 to May 1861. At the same time, they contribute to its establishment, giving rise to a series of periodical publications, first in Tangiers (Revista de la Cámara de Comercio Española de Tánger, 1878; El Eco Mauritano, 1889, etc.), then in Melilla (Diario de Melilla, 1893; El Telegrama del Rif, 1902), and later on in the other cities of the Protectorate after 1912. Ceuta benefitted from its first printing house at the beginning of the 19th century, with the liberal newspaper El Liberal Africano (1820), followed a long time later by the famous Revista de Tropas Coloniales (1924).

The first reason for the existence of the printing house, apart from making commonly used printed material, was the diffusion of press and journals. Nevertheless, many of them, in particular some of those located in Melilla (El Telegrama de Melilla), Tangiers (La Hispano-Arábiga de la Misión Católica Franciscana) and Ceuta, led to a noteworthy production of various types of works, written by military personnel, protagonists of the war campaigns, Franciscans, etc. Their content is related to the local history of the three cities, their military battles, and especially to the culture and history of Morocco; a set of books which is the exponent of the Africanist ideoloogy and a vehicle of Spain's expansionist and colonial policies in Africa. Literary fiction is scarce, almost absent; the best works written between 1860 and 1927 by authors who witnessed many of the Spain-Morroco military conflicts appeared in Spain and sold well. What was published at the local level in particular was composed of some travel books and war chronicles, without forgetting poems, tales, popular short stories, and local legends which appeared sporadically in the press; texts, in sum, which were unknown and of dissimilar esthetic quality.

The second phase of Spanish publishing in Morroco unfolds between 1927 and Morocco's independence in 1956. In these almost three decades during which the Protectorate's system brought about a clear political culture through the creation of research institutes-El Instituto Jalifiano Muley el Hassan in 1937, El Centro de Estudios Marroquíes in 1938, and El Instituto General Franco in 1938–, the consolidation of the Feria Anual del Libro, the creation of literary prizes and planning for libraries. The published books are linked to the previously mentioned cultural policies of the academic centers and the Alta Comisaría de España in Morocco, the Protectorate's maximum authority. The published books deal with Spanish-Moroccan topics in various fields, divided up between history, anthropology, ethnology, religions, etc., with authorship shared by Spaniards and Moroccans, which was an entirely new phenomenon from the previous publishing panorama.

Although quite scarce, literary publishing advances with respect to the previous phase of the three military campaigns, and this is embodied in three aspects: the reedition of classic works of Spanish literature, their translation into Arabic, and the publication of new works of fiction, especially novels, short stories, and poetry written by such writers as Arbide Martínez, Bacaicoa Anaiz, Benarroch Pinto, Diuri, García Figueras, Sabbag, etc. The publications, one must recognize, were brought into existence in the main printing houses and, in particular, in the Editora Marroquí, a supplement to the Librería Cremades de Tetuán, which among other things contributed to a good and artistic presentation of the works; in reality, and with reason, it was sometimes called Editorial Cremades.

A new publishing source was formed by literary journals founded during this era: Al-Motamid. Verso y Prosa (1947-1956), under the direction of the poetess Trina Mercader, and Ketama, the literary supplement of Tamuda (1953-1959), also directed by a poet, López Gorgé. Here there appeared poem and brief tales written by Spanish authors or linked to the Protectorate, in addition to Moroccans and Arabs, in both Arabic and Spanish, apart from poetc translations between the two languages. An equal effort in the poetic vanguard from the south was carried out by Melilla's Manantial. Cuadernos de Poesía y Crítica (1949-1951) and Alcántara. Cuadernos Literarios (1951-1952), the former being directed by la primera López Gorgé y Gómez Nisa, and the latter by Miguel Fernández.

It is worthy noting that during this second era, the printing presses of Ceuta, Tangiers, and Melilla which previously had been in operation continued their publishing work with the printing of new works which were always Africanist, and also with new periodical publications such as Mauritania. (1928-1963), the monthly magazine of the Franciscan Order of Tangiers, España (1938), an independent daily paper also from Tangiers -the most read paper in Morocco-, in addition to the Tetuan dailies, Marruecos (1942-1945) and its immediate successor Diario de África (1945-1962), both of which were very popular at that time in the Protectorate as well as in Andalucía.

Morocco's 1956 independence opens the third and final phase of publishing in Spanish, and it extends to the current time. If indeed the Franco regime made no effort to effectively promote Spanish culture and language in its former colony, the presence of Hispanic books and periodical publications in our country was maintained until the end of the 70s through the group of Spanish researchers who were linked with the north of the country where they continued living for work-related reasons. This contribution was seen in the publication of works on the archeology and the political and cultural history of Morocco, as well as in articles of the two main scientific journals which continued to be published in Rabat and Tetuan after 1956: Tamuda. Revista de Investigaciones Marroquíes (1953-1959) and its substitute, Hespéris-Tamuda (1959- ), in addition to Cuadernos de la Biblioteca Española de Tetuán (1964-1981). Ibn Azzour Hakim is one of the few Moroccans who survived by financing the publication of his own books in Spanish, apart from making contributions in previous journals.

The beginning of the 80s is the date in which Moroccan Hispanism comes to fruition in its research and creative aspect, and is strengthened in the two first decades of the 21st century. The tradition of periodical publications of an academic nature remains alive with annual journals with low numbers and editions: Revista Marroquí de Estudios Hispánicos (1991-1994), Anales. Revista de Estudios Ibéricos e Iberoamericanos (2003-2007), Maghriberia. Revista de Investigaciones Ibéricas e Iberoamericanas (2007- ), and Al Irfan. Revista de Ciencias Humanas y Sociales (2015- ). With regard to literary works, proceedings of colloquia which take place at the seven universities with Spanish departments and, beginning at the end of the 90s, research books, for the most part studies of Spanish and Latinamerican philology, as well as of the history of Spain-Morrocan relations, reappear, promoted by Spanish institutions (Instituto Cervantes, Ministerio de Educación, Cultura y Deporte, Embajada de España, etc.) and universities or Morrocan research centers, such as the Instituto de Estudios Hispano-Lusos de Rabat.

If indeed literary creation of literature written in Spanish in Morocco had its first breakthroughs in the colonial era, it also begins to grow also beginning in the 1980s, giving way to an emerging literature of Castilian expression whose authors belong for the most part to the north of the country. It is a literature in its infancy, still marginal in the national literary landscape, with no official or publishing support. The consecuences of this situation are: 1) many of the Moroccan authors tend to release their works of fiction through self-publication; 2) some official institutions take charge of financing part of these writers' works, such as the universities of Tetuán, and especially the cultural associations such as the Asociación Tetuán-Asmir and the Asociación de Escritores Marroquíes en Lengua Española (AEMLE) of Tetuán and Larache, respectively. It is necessary to point out that the literature in question-which recently has begun to open doors in Spain--has problems with printing materially modest works due to typographical issues, as well as serious distribution and reception difficulties, apart from the fact that is difficult to find or acquire since this literature has had unconventional circles of commercialization. 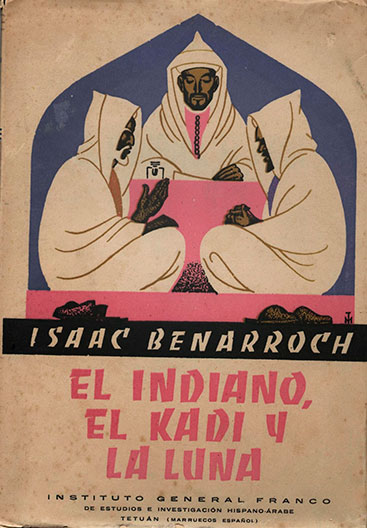 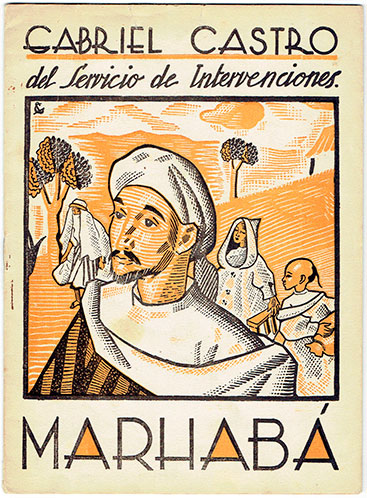 Cover of the book «Marhabá», by Gabriel Castro. 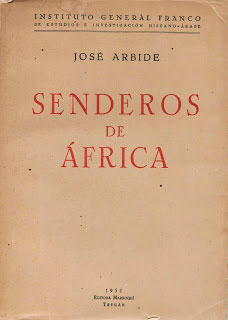