First, I would like to thank Theresa Sears for her detailed and conscientious probing of my recent De fiestas y aguafiestas: risa, locura e ideología en Cervantes y Avellaneda. I also would like to respond, however, to some of the objections she raises regarding my approach.

To Sears' question, «Which came first, the theory or the text?» (218), I can answer that the text definitely came first.

As for Sears' question as to whether I am aware of the different theories regarding the ultimate ideological and political impact of festivals such as Carnival (218), I might point out that I have been aware of them for over twenty years (see Iffland, «Apocalypse Later»). Moreover, I speak about them in De fiestas y aguafiestas (e. g., 167-68). Citing Peter Stallybrass and Allon White, I point out specifically that Bakhtin's original theories are inadequate in their portrayal of a quintessentially liberating role for Carnival («'there is no a priori revolutionary vector to carnival and transgression'», 168).

Regarding Carnival's being a «moment not a movement» (218), Sears is right to a large degree. My point was that it is a «moment» which can became particularly nasty when dominated groups use it to rise up against those whom they perceive as their oppressors (see the examples I cite [e. g., 168-69], including from very recent times). The carnivalizing «worldupside-down» can also prolong itself occasionally as a very dangerous political movement -see Christopher Hill's classic The World Turned Upside Down: Radical Ideas during the English Revolution, cited frequently in De fiestas y aguafiestas. As for the effortlessness with which «established power» is able to confiscate festive activity (218), most serious studies show that it took religious and political authorities nearly a millennium to do so.

As for my alleged overstating of the degree to which the fundamental «logic» of Carnival runs through Don Quijote from beginning to end (218), let me first point out that there is considerably more evidence of that «logic» than is discussed in my analysis. Part of my purpose was to demonstrate just how correct Bakhtin's intuitions regarding Don Quijote actually were. Readers familiar with the Russian critic's work will remember how tempted he seems to be with the notion of carrying out a full-scale application of his theories to Cervantes's masterpiece -a temptation, alas, to which he never succumbed. While a number of more recent critics have explored the carnivalesque dimension of Don Quijote (e. g., Redondo and Gorfkle), none   —190→   do so from the precise angle I pursue.

Part of what might be perceived as my overzealousness in pursuing the popular-festive connections in Don Quijote has to do precisely with the fact that I anticipated skeptical reactions such as Sears's. Moreover, I have a personal aversion toward works of criticism in which the theoretical approach employed is barely sustained by actual textual analysis -a phenomenon which, unfortunately, is becoming increasingly common in literary scholarship.

As for my alleged «assigning massive symbolic value to the slightest gestures or actions» (219), I would respond that to take a fragment out of a much larger analytical context so as to ridicule it is something which can be done with ease with virtually any critical text one might choose to discuss. The specific instance in which Sears indulges in this practice has to do with a broad examination of the role of the body in Cervantes so as to contrast it with what we find in Avellaneda. Also, it's unclear to me why what she proposes in her own reading (which is fairly self-evident) is in opposition to my own. As for my comments on the location of Rocinante's «ancas», I apologize to Sears for insulting her intelligence.

Regarding my failure to discuss the «complex narratorial apparatus» (219) of Don Quijote, I should point out that with all the extensive and very competent work already done on the subject (Riley, Haley, El Saffar, Moner, Parr, etc.), and given that such a discussion would not have been pertinent to establishing my central points, I decided not to engage in it.

As for my brutalizing of the Dulcinea problematic (219), my point has to do with tracing the sociopolitical roots, and consequences, of Don Quijote's entire project. No matter what image of her Don Quijote may carry in his mind, other characters in the work (starting with the Toledan merchants in I, 4) are always forcing the issue of the «historical referent» behind the name. Don Quijote himself is forced to admit that her lineage is «recent», to say the least (see his conversation with Vivaldo in I, 13). And let's not forget that he in fact tries to visit the «distant model» when he travels to El Toboso right at the beginning of Part II (chapters 8-10). I agree that Dulcinea is a complex figure tied to a literary tradition, but we can't overlook the fact that she has as her point of origin an actual moza labradora who lives near Alonso Quijano.

As for Sancho's dreams of advancement (219), yes, there is an obvious literary parody going on (as we all have known for years-nay, centuries). My point is that Sancho also happens to be doing what thousands of other campesinos are doing at the time -that is, leaving the countryside in search of a better life, thereby creating an enormous problem for the entire Spanish economy. Sancho himself is quite explicit about the reasons for which he is traveling around with Don Quijote- that is, material gain (yes,   —191→   pushed to absurd extremes, given the tonto side of his tonto-listo identity). Regarding the supposed ambivalence of the way in which Sancho regards his dreams, it would have been useful had Sears pointed out specific passages. There are surely many instances in which there is no ambivalence at all (especially after Sancho comes back with a handkerchief full of gold coins at the end of Part I).

As for my alleged simplification of «Cervantes's complex ambiguities to prove a sociopolitical point» (220), it would have been useful for Sears's readers to have the complete context of the phrase she cites in arriving at that judgment. In the very last pages of the epilogue to my study, I ask the question as to why Cervantes, specifically, was drawn so strongly toward the rich symbolism of Carnival culture (assuming, of course, that my extensive analysis of its presence was not a product of my-and Bakhtin's- imagination). The phrase Sears cites has as its point of departure François Delpech's interesting reflections on the precise historical junctures in which folk culture has been used as the medium of political dissidence; also with Stallybrass's and White's well-known discussion of how Carnival imagery and language was used by middle-class and proto-bourgeois groups in their efforts to weaken the hegemony of the aristocracy. While I am, indeed, putting forth an hypothesis, I by no means claim to have answered the question: Why Cervantes? («En ese sentido, la pregunta -¿por qué Cervantes?- queda por responder todavía» - 581-82.)

As for my failure «to acknowledge the fragile nature of the middle class in seventeenth-century» (220), please note that in the exact phrase Sears cites, I refer to the «incipiente burguesía o clase media», not to a full-blown version. In fact, it would never occur to me to ascribe full-blown bourgeois -or even middle-class- ideology to Cervantes. I am fully aware of the complexities of class dynamics of the period, including the analysis of them carried out by Maravall (whom I cite extensively in my book). Indeed, middling social sectors in Spain did tend to ape the aristocracy, as they did in many places in Europe, but we surely must recognize that bourgeois ideology evolved in stages. Class ideologies, particularly those related to middle sectors, rarely (never, perhaps?) exist in «pure» form. And the fact that Cervantes did probably harbor a «nostalgia for idealized aristocratic values» (220) does not prevent him, or other intellectuals of the period (e. g., Quevedo), from using those values to attack the contemporary version of the aristocracy. In social conflicts in general, it is a time-honored tradition to beat one's foe over the head with his own stick.

Don Quijote does indeed look backward to the time when «blood and deeds were one» (220), but his gaze extends further than what is suggested by Sears. We cannot simply excise the Golden Age speech from the text (I, 11), nor the passage in which Don Quijote says that he has been born into   —192→   the world to restore that ideal period -in which, by the way, a class structure, and private property along with it, did not exist (see I, 20). Virtually all ideologies which suggest a leveling of social hierarchies tend to invoke an earlier moment in human history, as I point out on pp. 74-75.

Summing up, while I sincerely appreciate Sears' many positive comments about my work, and while I by no means expect one-hundred-percent praise of my work from reviewers (particularly conscientious ones), I've nevertheless felt myself obliged to address some misconceptions that might arise as a result of her criticisms. And as I've noted in my book, at the very least I hope that its arguments will, indeed, serve to move cervantistas to reflect on an important subject -to wit, the Cervantes-Avellaneda relationship- we have largely abandoned since the study of Stephen Gilman, half a century ago.

Stallybrass, Peter, and Allon White. The Politics and Poetics of Transgression. Ithaca: Cornell UP, 1986. 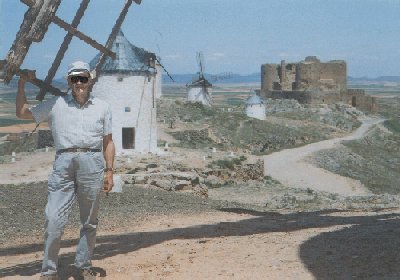